New year, new stats! A few months ago, Epic agreed to let me use their Fortnite animations for my open source research with the Animation Compression Library (ACL). Following months of work to refactor Unreal Engine 4 in order to natively support animation compression plugins, it has finally entered the review stage on Epic’s end. While I had hoped the changes could make it in time for Unreal Engine 4.22, due to unforeseen delays, 4.23 seems a much more likely candidate.

Even though the code isn’t public yet, the new updated ACL plugin kicks ass and Fortnite is a great title to showcase it with. The real game uses the classic UE4 codecs but I recompressed everything with the latest and greatest. After spending several hundred hours compressing the animations, fixing bugs, and iterating I can finally present the results.

TL;DR: Inside Fortnite, ACL shines bright with 2x faster compression, 2x smaller memory footprint, and higher accuracy. Decompression is 1.6x faster on desktop, 2.3x faster on a Samsung S8, and 1.2x faster on the Xbox One.

For the UE4 measurements I used a modified UE 4.21 with its default Automatic Compression. It tries a list of codecs in parallel and selects the optimal result by considering both size and accuracy.

ACL uses a modified version of the open source ACL Plugin v0.2.2. It uses its own default compression settings and in the rare event where the error is above 1cm, it falls back automatically to safer settings.

Although the UE4 refactor doesn’t change the legacy codecs, it does speed up their decompression a bit compared to previous UE4 releases. That is one of many benefits everyone will get to enjoy as a result of my refactor work regardless of which codec is used.

While the UE4 and ACL error measurements never exactly matched, they historically have been very close for every single clip I had tried, until Fortnite. As it turns out, some exotic animations brought to light the fact that some subtle differences in how they both measure the error can lead to some large perceived discrepancies. This has now been documented in the plugin here.

It is worth noting that because ACL does not currently support a floating point sample rate (e.g 28.3 FPS), those clips (and there are many) have a higher reported error with UE4 because by rounding, we are effectively time stretching those clips a tiny bit. They still look just as good though. This will be fixed in the next version.

I extracted all the non-additive animations regardless of whether they were used by the game or not: a grand total of 8304 clips! A total raw size of 17 GB and roughly 17.5 hours worth of playback.

Fortnite has a surprising number of exotic clips. Some take hours to compress with UE4 and others have a range of motion as wide as the distance between the earth and the moon! These allowed me to identify a number of very subtle bugs in ACL and to fix them.

Once again, ACL performs admirably: the compression speed is twice as fast (1.83x), the memory footprint reduces in half (2.03x smaller), and the accuracy is right where we want it. This is also in line with the previous results from Paragon.

UE4’s accuracy struggles a bit with a few clips but in practice the error might not be visible as the overwhelming majority of samples are very accurate. This is consistent as well with previous results. 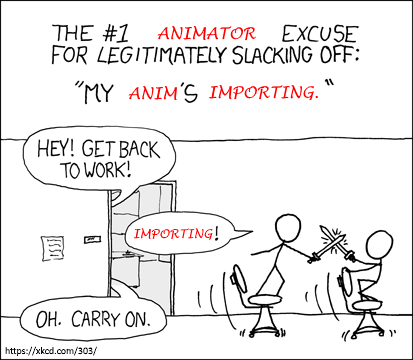 A handful of clips contribute to a large portion of the UE4 compression time and its high error. One clip in particular stands out: it has 1167 bones, 8371 samples at 120 FPS, and a total raw size of 372.66 MB. Its range of motion peaks at 477000 kilometers away from the origin! It truly pushes the codecs to their absolute limits.

It takes almost 5 hours to compress with UE4! In comparison, ACL zips through in well under 2 minutes. While it tries its best with the default settings it ultimately ends up using the safety fallback and thus compresses twice in that amount of time.

Overall, if you added the ACL codec to the Automatic Compression list, here is how it would perform:

Fortnite has the handy ability to create replays. These make gathering deterministic profiling numbers a breeze. The numbers that follow are from a 50 vs 50 replay. On each platform, a section of the replay with some high intensity action was profiled.

The performance on desktop looks pretty good. ACL is consistently faster, about 38% on average. It also appears a bit less noisy, a direct benefit of the improved cache friendliness of its algorithm.

ACL really shines on mobile. On average it is 56% faster but that is only part of the story. On the S8 it appears that the core is hyperthreaded and another thread does heavy work and applies cache pressure. This causes all sorts of spikes with UE4 but in comparison, the cache aware ACL allows it to maintain a clean and consistent performance.

Hyperthreading on the CPU (and the GPU) works, roughly speaking, by the processor switching to another thread already executing when it notices that the current thread is stalled waiting on a slow operation, typically when memory needs to be pulled into the cache. Both threads are executing in the sense that they have data being held in registers but only one of them advances at a time on that core. When one stalls, the other executes.

When you have a piece of code that triggers a lot of cache misses, such as some of the legacy UE4 codecs, the processor will be more likely to switch to the other hyperthread. When this happens, execution is suspended and it will only resume once the other thread stalls or the time slice expires. This could be a long time especially if the other hyperthread is executing cache friendly code and doesn’t otherwise stall often.

This translates into the type of graph above where there is heavy fluctuation as the execution time varies widely from the noise of the neighbor hyperthread.

On the other hand, when the code is cache friendly, it doesn’t give the chance to the other thread to run. This gives a nice and smooth graph for that current thread as the risk of long interruptions is reduced. When the code is that optimized, hyperthreading typically doesn’t help speed things up much as both threads compete for the same time slice with few opportunities to hide stalling latency. This is also what I observed when measuring the compression performance. In theory due to the higher cache pressure, performance could even degrade with hyperthreading but in practice I haven’t observed it, not with ACL at least.

On the Xbox One ACL is about 13% faster on average. Both lines seem to have very similar shapes unlike the previous two platforms due in large part to the absence of hyperthreading. There are a few possibilities as to why the gain isn’t as significant on this platform:

The last two points seems the most likely culprits. ACL does a bit more work per sample decompressed than UE4 but everything is cache friendly. This gives it a massive edge when memory is slow compared to the CPU clock as is the case on my desktop, the Samsung S8, and lots of other platforms.

With faster compression, faster decompression on every platform, a smaller memory footprint, and higher accuracy, ACL continues to shine in UE4 and it won’t be long now before everyone can find it on the marketplace for free.

In the meantime, in the next few months I will perform another release of ACL and its plugin with all the latest fixes made possible with Fortnite’s data.

To my knowledge, the first game released with ACL came out in November 2018 with the public UE4 plugin: OVERKILL’s The Walking Dead. I was told it reduced their animation memory footprint by over 50% helping them fit within their console budgets.

A number of people have also integrated it into their own custom game engines and although I have no idea if they are using it or not, Remedy Entertainment has forked ACL!

Last but not least, I’d like to extend a special shout-out to Epic for allowing me to do this and to the ACL contributors!