As mentioned in my previous post, I started working on integrating ACL into Unreal 4.15 locally. Today I can finally confirm that not only does it work but it rocks!

In order to stress test ACL in a real game engine with real content, I set out to test it on the Matinee fight scene that can be found on the Unreal 4 Marketplace.

This is a very complex sequence with fast movements and LOTS of data. The main character (the white trooper) has over 540 bones because the whole cloth motion is baked. The sequence lasts about 66 seconds. The secondary characters move in and out of view and overall spend the overwhelming majority of the sequence completely idle and off screen.

Here is a short extract of the sequence using ACL for every character. This marks the first visual test and confirmation that ACL works.

The video isn’t too interesting but once again the numbers tell a story of their own. Packaged As Is is the default settings used when you first open it up in the editor, as packaged on the marketplace. For ACL, the integration is somewhat dirty for now and uses the same settings as for the CMU database: the error is measured 3cm away from the bones, the error threshold is 0.1mm, and the segments are 16 frames long. 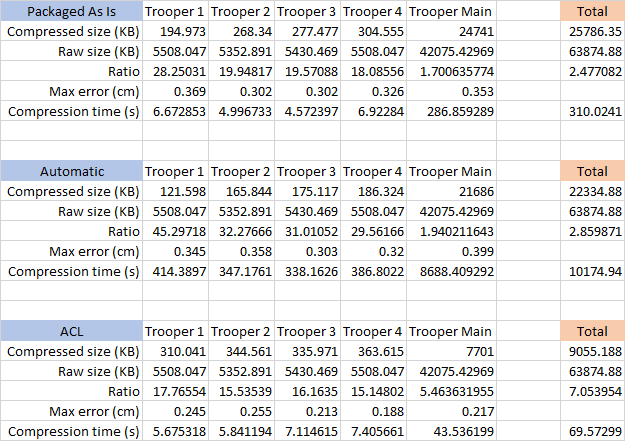 ACL completely surpassed my own expectations here. The whole sequence is 59.5% smaller! The main trooper is a whopping 64.5% smaller! That’s nearly 3x smaller! Compression time is also entirely reasonable sitting at just over 1 minute. While the packaged settings are decent here sitting at around 5 minutes, the automatic compression setting is not practical with almost 3 hours. The error shown is what Unreal 4 reports in the dialog box after compression, it thus uses the Unreal 4 error metric and here again we can see that ACL is superior.

However, ACL does not perform as good on the secondary characters and ends up significantly larger. This is because they are mostly idle. Idle bones compress extremely well with linear key reduction but because ACL uses short segments, it is forced to retain at least a single key per segment. With some sort of automatic segment partitioning the memory footprint could reduce quite a bit here or even by simply using larger segments.

The integration that I have made will not be public or published for quite some time. Until we reach version 1.0, I wouldn’t want to support actual games while I am still potentially making large changes to the library. Once ACL is production ready and robust, I will see with Epic how we can go about making ACL a first-class citizen in their engine. In the meantime, I will maintain it locally and use it to test and validate ACL on the other platforms supported by Unreal.

For the time being, all hope is not lost! For the past 2 months, I have been working with Epic on improving the stock Unreal 4 animation compression. Our primary focus has been to improve decompression speed and reduce the compression time without compromising the already excellent memory footprint and accuracy. If all goes well these changes should make it in the next release and once that happens, I will update the relevant charts and graphs published here as well as in the ACL documentation.